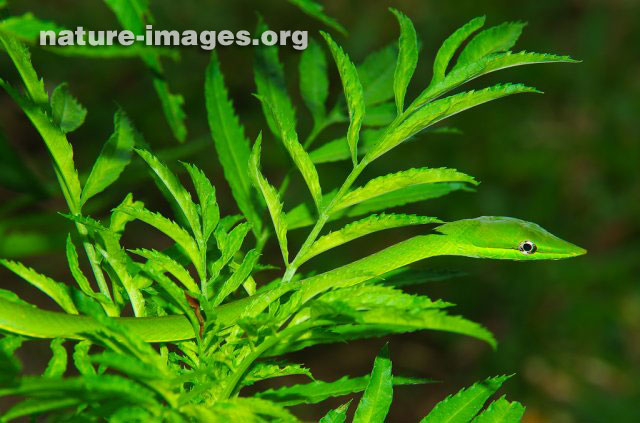 Description from Wkipedia: The green vine snake stays high on trees and looks down to the ground. When a mouse, lizard or nest is found, the snake follows the prey a short distance and smells it carefully. If the snake is content with it, it bites into the head and lifts the prey 20–40 cm (8–16 in) from the ground. With this the snake prevents the prey from using its physical strength. The vine snake has two larger upper teeth at the back of its mouth; these teeth permit the toxic saliva to penetrate the wounds and to immobilize the prey. Then it is rapidly swallowed. Once the prey is completely in the snake’s body, the vine snake searches for a resting place, usually in the highest point of a tree. The venom of Oxybelis fulgidus is fast acting on small animals but has little or no effect on humans, envenomation of human beings is rare as the rear fangs requires the snake to grab and chew to get its venom in, something most people will not stand for. In the rare instance of human envenomation, slight tingling to temporary numbness at the site of the bite is reported. As with all venomous creatures serious allergic reactions are possible so caution should still be taken when handling these snakes.