This red-eyed vireo (Vireo olivaceus) photo was taken in Altos del Maria, Panama. The breeding habitat is open wooded areas across Canada and the eastern and northwestern United States. These birds migrate to South America, where they spend the winter. The Latin American population occur in virtually any wooded habitat in their range. Most of these are residents, but the populations breeding in the far southern part of this species’ range (e.g. most of its range in Argentina, Uruguay, Paraguay and Bolivia) migrate north as far as Central America. 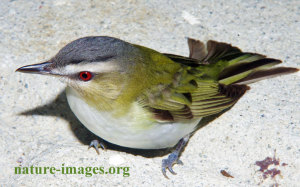